On 18 December 2005, about a week after the Cronulla Riots, Keysar Trad was one of the speakers at a “peace rally” in front of 5000 people at Hyde Park in Sydney. He said this:

“I never lost my faith in the great people of this nation and if a handful of students can muster so many thousands of true Australians here today, then there is a poke in the eye of those racist rednecks in tabloid journalism.”

Later in his speech, Trad placed part of the blame for the Cronulla Riots on Radio 2GB. He said:

One of the people at the rally was Chris Glasscock, a journalist for 2GB. He reported back to Jason Morrison, the host of the morning show on 2GB. While there was no evidence about it, it was inferred that Glasscock told Morrison about the peace rally and gave him information upon which Morrison was to deliver a tirade during his morning stint, the following day. That tirade started on 2GB at 10.05 am, went for 11 minutes and included the following:

“Now that’s Keysar Trad at a peace rally … Now I’m sorry about the quality of that, but as I said Chris our reporter there had to pull back because it wasn’t safe for him to be standing at the front while all this was going on.

… And it goes on, there is about ten minutes of this bile about how evil and hate filled this radio station is and about how we incite people to commit acts of violence and racist attitudes. I don’t think that I’ve ever quite done that, like he did. In fact I don’t think anyone here has ever done anything quite like that….

Now Keysar Trad, you are a disgraceful individual and I’m not alone in thinking this, I won’t talk to you on the air because you represent no one’s views other than your own, so you know, why you call up purporting to be from the Islamic community is beyond me. You are one guy who basically has been marginalized. And I think the more you say the more you represent to me that you are a dangerous individual to be out there trying to represent the views because I think you’re responsible about more misinformation about the Islamic community of the attitudes of Christian Australians than any other person.

Now he is widely perceived as a pest, that’s the way I see him, he is not a peacemaker, so why he was invited to a peace rally is beyond me…

I mean this guy has a media monitoring company basically watching about any reference about him or for any reference that he believes will be advantageous towards his cause and there he is straight on the phone straight on the fax pumping out letters of complaint, he is one of the most complaining people around the place and he does nothing to try to address the actual issues, he just wants to sort of hatchet job people who once gave him the privileged position that he thinks he has.”

Trad sued 2GB and complained that the broadcast contained the following imputations of him:

(a) Trad stirred up hatred against a 2GB reporter which caused him to have concerns about his own personal safety;

(b)   Trad incites people to commit acts of violence;

(d)   Trad is a dangerous individual;

(g)   Trad is a disgraceful individual;

(h)   Trad is widely perceived as a pest;

(j)     Trad deliberately gives out misinformation about the Islamic community;

(k)   Trad attacks those people who once gave him a privileged position.

The case was brought under the 1974 Defamation Act in NSW, and the trial was conducted in the NSW Supreme Court before a jury. Radio 2GB argued that each of the imputations were covered by qualified privilege, because the broadcast was a reply to attack. It also pleaded truth and contextual imputations defences.

A key issue at the trial was whether the journalist, Glasscock, was really in danger at the peace rally. Trad argued that Glasscock had told Morrison that Trad had gestured towards him and he was in danger. Trad  argued this was false and and Glasscock it.

It was found that at the peace rally, Trad did not gesture or point at Glasscock, who did not “retreat” or “pull back”. On 3 May 2006, the CEO of Radio 2GB admitted in a letter:

“It is clear from the footage that the information given to Mr Morrison [by Mr Glasscock] was incorrect at the time of the rally, and that you did not gesture towards our reporter during your speech, nor did he retreat from the stage during your speech… I have spoken to Mr Morrison about this misinformation and we have agreed that when he is next on air (during June) he will clarify this error.”

For the purposes of malice, the question was whether Radio 2GB’s state of mind was that of Mr Morrison or Mr Glasscock or a combination of both.

At the trial, the jury found that the 8 imputations above were contained in the broadcast. It was also found by the Trial Judge, McLellan CJ, that the defence of qualified privilege was made out and that a number of imputations were substantially true.

At that point, Trad had lost.

Trad appealed  to the NSW Court of Appeal.

The Court of Appeal found that the Trial Judge’s finding of substantial truth was entered into on a “false basis” because McLellan CJ failed to apply the right test. His Honour applied the “right thinking person” test, as opposed to the test for “ordinary decent persons, being reasonable people of ordinary intelligence, experience and education who brought to the question their general knowledge and experience of worldly affairs.” [54]. The Court of Appeal also found that the qualified privilege defence could not be made out for imputations (c), (h) and (k) because those imputations were not properly relevant as a reply to the attack made by Trad.

The Court of Appeal then remitted those 3 imputations back to the Common Law division for an assessment of damages.

So by this time, Trad had won.

Radio 2GB appealed to the High Court and sought to restore the decision of the trial judge. Trad cross-appealed seeking rejection of the qualified privilege defence for imputations (a), (b), (d), (g) and (j) and seeking to have those remitted for an assessment of damages as well.

privilege defence for a reply to an attack. After having analysed the history of 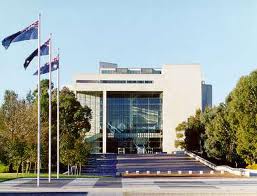 the defence, the joint judgment of 3 justices of the High Court accepted the following statement of Dixon J in Penton v Calwell as reflecting the proper state of the law:

“The foundation of the privilege is the necessity allowing the party attacked free scope to place his case before the body whose judgment the attacking party has sought to affect. In this instance, it is assumed to be the entire public. The purpose is to prevent the charges operating to his prejudice. It may be conceded that to impugn the truth of the charges contained in the attack and even the general veracity of the attacker may be a proper exercise of the privilege, if it be commensurate with the occasion. If that is a question submitted to or an argument used before the body to whom the attacker has appealed and it is done bona fide for the purpose of vindication, the law will not allow the liability of the party attacked to depend on the truth or otherwise of defamatory statements he so makes by way of defence.”

Justice Keifel also concluded that statements in reply to attack will be protected if they are fairly relevant to accusations made and published bona fide. Such a person is entitled to appeal to the same audience as his attacker and if, in answering the attack he makes relevant defamatory statements about the person who has attacked him, such statements are prima facie privileged. [131].

The judges also addressed questions of malice and substantial truth. In particular, the truth defence was not finally determined by the Court of Appeal and nor was it remitted to the Common Law Division. Radio 2GB submitted that  it was found by the trial judge, the imputations were substantially true because of Trad’s views on topics including: women victims of sexual violence, homosexuals, Jews, child martyrs, terrorism, Anglo-Irish Australians and Hindus [58]. The trial judge found that Trad’s encouragement of others to share his views demonstrated the substantial truth of the imputation that he incited people to have racist attitudes.

The matter was remitted to the Court of Appeal to consider:

Maybe it is just me, but I am  not sure why these truth defences were  remitted to the Court of Appeal if the reply to attack defence is already made out. In any event, probably because they are relevant to the assessment of damages, should  defences for imputations (h) and (k) be refused.

Even if that happened, it seems Trad cannot win on the most serious imputations. He is left with having to fight for the right for damages for imputations that he “is widely perceived as a pest” and that he “attacks people who once gave him a privileged position”.

The moral of the story seems to be this: if attacked, a person can defame the attacker, in front of the same audience, if it is fairly relevant to cast doubt on the attack made.

Anyway, the case will go back to the Court of Appeal and maybe back to the Common Law Division to assess damages and by that time the parties will probably be left wondering what it is was they were all fighting over in the first place. Perhaps it will just be the legal costs.

Has Trad won? Remains to be seen.