Princess Irina Alexandrovna was born in 1895, the granddaughter of Alexander III and niece of the slain Russian Tsar Nicholas II. She was Russian Royalty, a renowned beauty and when she was single: one of the most eligible bachelorettes in Russia.

Prince Felix Youssoupoff was from a long line of Tatar khans, Russian princes and the sole heir to one of the world’s most colossal fortunes. He married Princess Irina and for scholars of Russian history, the name Youssoupoff would also ring another big bell. It had to do with Rasputin – the mad monk who legendarily gained influence with the Tsar, and was murdered in December 1916. As it transpired, Rasputin became one of the most famous Russians ever. He became the subject of countless books, movies and catchy disco tunes.

Rasputin was murdered in the cellars of the Yousoupoff Palace on Moika Canal in Petrograd, and Prince Felix Youssoupoff, husband to then 21 year-old Irina, was the principal mastermind behind that assassination plot. The Youssoupoffs left Russia during the period of the Civil War in 1919 and lived in Paris, off vast sums of money that they made from selling extraordinary jewels and artwork that they managed to scuttle out with from the Motherland.

18 years later and although talking films had only been around for 7 years, already, there had been 2 films about Rasputin. One starred a Russian priest who happened to be one of Rasputin’s enemies and fled firstly to Norway, and then to Hollywood to start an acting career where he basically appeared as himself. In another film, Rasputin, the Black Monk, Felix was approached to appear and play himself. No way.

Meanwhile, MGM had a major project in the wind. Producers engaged a writer Mercedes de Acosta, to write a film about the death of Rasputin. Little did the producers know that Acosta had actually met the Youssoupoffs and Felix had regaled her about the murder in great detail. Small world. 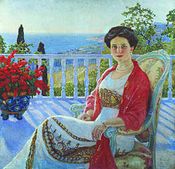 So when the Producers asked Acosta to write in a scene where Rasputin tried to seduce Princess Irina, and the scene had to be “a very violent and terrific scene”, she refused to because she knew that Princess Irina had never actually met him. But the producers insisted: never let the truth get in the way of a good story. Acosta apparently told them “such a sequence would be absolutely unauthentic and probably libellous.”. The producers ignored her, fired her and got someone else to write the terrific scene, a scene that would land MGM in litigation all over the world.

The film was called “Rasputin & The Empress”, and according to MGM’s Counsel, a work of fiction.  Three Barrymores appeared in the film: John was Prince Youssoupoff (under the name of Prince Chegodieff), Lionel was Rasputin (under the name Rasputin) and Ethel Barrymore was Empress Alexandra. The Barrymores appeared together for the first and only time and apparently, at that time, it was a big deal. Now we have only one Barrymore and she won’t appear in any movie unless its with Adam Sandler or is a re-run of ET.

Another actress played the role of “Princess Natasha”, whose resemblance to Princess Irina became the main point of the case. The violent seduction scene was included, the writing was apparently shambolic and the film opened in the Astor Theatre (not in St Kilda), in New York City on 23 December 1932. It cost $1 million to make and was actually nominated for an Academy Award.

The preface to the film started with these words: “This film concerns the destruction of an empire, brought about by the mad ambition of one man. A few of the characters are still alive. The rest met death by violence.”

But the Yousoupoffs got wind of the producers intention to include the scene where Princess “Natasha” was seduced by Rasputin and were put in touch with a New York show business lawyer, Fanny Holtzmann. She set about trying to do a deal with MGM where the scene was removed, or some money was paid ($5,000), and the credits stated that the story was one of fiction. MGM fobbed her off and so began an epic legal battle that was to traverse many borders.

MGM ran a number of arguments:

Princess Irina gave evidence and was cross-examined. She never met Rasputin. Simple. She also adduced evidence from British and Russian Royalty who all believed that she had been identified in the film, especially given that everyone knew that Rasputin had been murdered by Prince Felix and Princess Irina was his wife.

Prince Felix gave evidence and openly described in great detail why he had assassinated Rasputin and what happened that night. Apparently Rasputin had told him that he was working for Germany and was trying to get Nicholas II to abdicate the thrown. Rasputin had to be killed “for the good of Russia.”  And so the evidence came out, in what was probably the first time in legal history when admitting to murder actually helped a party’s case.

MGM called evidence from their own movie-goers who thought the movie was a fantastic work of fiction. Not sure how that works when the title of the movie had “Rasputin” in it and the preface says that a few of the characters are still alive…

Regardless, the film producers were not called and in directing the jury, the judge nailed his colours to the mast:

“No one can doubt that if this is a libel, it is a gross, insulting and injurious one. It is difficult to imagine a worse libel upon a woman who is happily married and upon whose virtue nobody has ever dared to cast a slur than to say that she had been seduced or ravished by such a villain as Rasputin. That is the most vile libel that could be imagined.”

The jury took 2 hours to reach their verdict. Princess Irina won 25,000 pounds, which at the time, was one of the largest awards in the history of the world.

The case also became significant for lawyers. The decision was ground-breaking for two points: Talking films were libel not slander and Princess Irina was defamed because she was “shunned and avoided”. These form a cornerstone of the common law of defamation to this day. Not that the Youssoupoffs cared, they had to retain a standard of living to which they had become accustomed. Which they did.

MGM appealed, lost and faced a raft of suits from Princess Irina all over the world. A settlement was reached with Fanny Holtzmann, reported as around $750,000 plus costs, plus the UK verdict. So the Youssoupoffs rode off into the sunset with their massive win, MGM with their tail between their legs. Nothing like a happy ending in litigation.