In a BRW 2002 edition, Ross Palmer was listed as being worth $180 million. On 10 June 2009, the Brisbane Courier-Mail published an article in its gossip column, “City Beat”. The article said this:

On a quiet day yesterday your diarist got thinking about the old roaring 80s and all those great characters who littered the corporate landscape.

In particular, we wondered what ever did happen to that great swashbuckling Queensland entrepreneur, Ross Palmer, the gent who in the BRW 2002 edition was listed as being worth a cool $180 million. Today that sum is greatly reduced. Palmer received over $80 million from the sale of his Palmer Tube Mills in 1994 but business deals have cost him plenty in recent years.

He had to sell his number one King Arthur’s Court pile, lost out in his ANI stoush with Kerry Packer in the late 90s which cost him a seat on the board and some $30 million to $40 million in lost share value after his exposure.

He had lost an estimated $12 million on his daughter Vanessa’s hippy women’s underpants and stocking venture and spent a fair bit of cash on motor racing on the way through… and battled a divorce to boot.

Now he is defending a Supreme Court action over his last asset, Poolrite. He is being sued in the Supreme Court of Queensland by a former group CEO, Frank Slowiak, for a six figure sum for breach of contract, unpaid annual leave and unpaid bonuses going back four years, unpaid superannuation, unpaid salary and wages and unpaid equity entitlements.

Oh, yes, he also lost his precious clipper, Serica, a two-mast boat that has been sold.”

Next to these words was a cartoon of a naked plaintiff, standing in a section of steel tubing on which was etched “Palmer Tube Mills”. Below the cartoon were the words “Ross Palmer… former swashbuckling entrepreneur”.

The plaintiff pleaded that the words under the heading “Downsized”, together with the cartoon contained the following imputations, that the plaintiff:

• is a failed businessman;

• is an incompetent businessman;

• is a businessman who makes unwise business decisions;

• is a businessman who makes unwise business investments;

• as a result of being a failed and incompetent businessman who has made unwise business decisions and investments, has been forced to sell his 1 King Arthur’s Court mansion and precious two mast boat;

• as a result of being a failed and incompetent businessman who has made unwise business decisions and investments, has now only one last asset, a business that itself is the subject of a six figure Supreme Court claim for unpaid wages, superannuation, annual leave and bonuses, by a former CEO;

• is a businessman who has presided over a string of business losses that have greatly reduced his personal fortune once estimated by BRW to be $180 million.

The Courier Mail applied to strike out all of the imputations except the last one. It submitted that each of the other imputations were not reasonably capable of being conveyed by the publication.

The primary judge noted that any strained, or forced, or utterly unreasonable interpretation had to be rejected. The trial judge found that the publication was capable of giving rise to the imputations.

The Courier Mail appealed to the Queensland Court of Appeal. The plaintiff submitted that the imputations arose from the flavour of the publication and that the sting of it was that he was a failed businessman. Further, he submitted that the ordinary reasonable reader would have regard to things such as that the publication appeared in a gossip column, the heading “Downsized”, together with the cartoon depicted an image of failure and the word “former” entrepreneur, which suggested that he had retired from business when he had not.

The Court of Appeal did refer to the fact that the publication appeared in a gossip column beside the cartoon of the plaintiff wearing a section of tubing, reminiscent of a barrel, covering his nakedness. The ordinary reasonable reader would understand such a cartoon was one commonly used to depict people who had lost everything, including their clothes. Then reading the publication as a whole, the Court of Appeal concluded that the imputations were capable of being conveyed and the appeal was dismissed.

Ross Palmer always maintained that the contents of this article were false.

On 2 June 2012, the Courier-Mail published this apology on its editorial page: 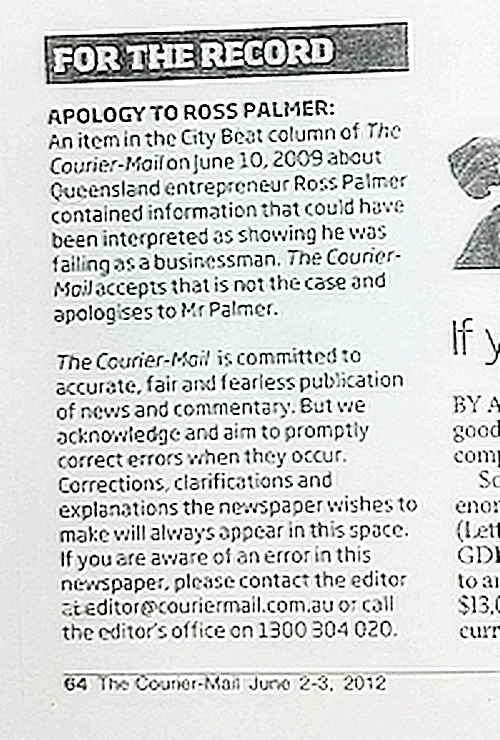